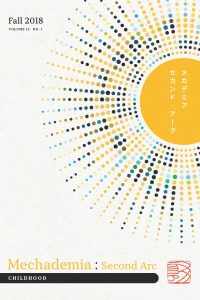 One of the most powerful steps in the development process of a new academic field is the launch of a journal to collect and present new scholarly writing in the field. If nothing else, a journal means that enough scholars are interested in a particular topic area or on a particular subject to support the existence of one – and thus, can signal that the area or subject is supported by an actual community. In this way, publications such as Animation: An Interdisciplinary Journal, International Journal of Comic Art, and Journal of Fandom Studies help support the idea that animation studies, comics studies – and, recently, fandom studies do, in fact, exist as actual academic fields.

In 2006, the idea of approaching Japanese animation as a subject of academic study was certainly not unheard of. Susan Napier first introduced it in 2001’s Anime from Akira to Princess Mononoke: Experiencing Contemporary Japanese Animation – followed by titles such as Roland Kelts’ Japanamerica: How Japanese Pop Culture Has Invaded the U.S. and Brian Ruh’s Stray Dog of Anime: The Films of Mamoru Oshii. There were at least several classes on Japanese animation and Japanese comics at various colleges/universities around the U.S., and a small but active and growing community of scholars interested in the topic. So, when the University of Minnesota Press announced plans to launch an full-scale ongoing scholarly publication on anime, manga, and related topics, the announcement was seen as exciting and welcome – but not unexpected.

The first volume of Mechademia: An Annual Forum for Anime, Manga, and the Fan Arts set the tone for the publication with several unique features. Its contents were structured around a common theme – in that case, “Emerging World of Anime and Manga”, and included both original articles with titles such as The Japan Fad in Global Youth Culture and Millennial Capitalism, The Werewolf in the Crested Kimono: The Wolf-Human Dynamic in Anime and Manga, and Assessing Interactivity in Video Game Design, translations of materials that had already previously been published in Japanese, shorter commentary pieces, reviews, interviews, and artwork. Nine more followed, with subtitles such as Limits of the Human (2008), User Enhanced (2011), and Origins (2014). Mechademia consistently attracted submissions from leading academics, but also welcomed work from graduate students and independent scholars, the volumes were easy to access electronically via JSTOR and Project Muse and widely available in academic libraries, and many of the individual essays received frequent citations in subsequent scholarship.

However, following 2015’s Volume 10, World Renewal, Mechademia‘s editorial team made a decision to expand its scope to encompass more broadly “scholarship on media cultures and texts from across Asia”, and thematically, “topics of current interest to scholars of Asian art, animation, literature, film, comics-manga-manwah, video games, merchandise, digital storytelling, and other ever-emerging media”. To underline this change, the journal would be formally retitled Mechademia: Second Arc, and, going forward, would be published twice a year. The call for papers for the initial volume – “Childhood” – was distributed in the summer of 2016. An “extraordinary series of delays on the publication side” followed, but Mechademia: Second Arc – “Childhood”, numbered as Volume 11, Number 1, and with a Fall 2018 cover date, is finally now available, though at this point, only online, through JSTOR and Project Muse (according to a notice on the University of the Minnesota Press website, the issue “is not in stock and the estimated shipping date is not available at this time”).

In any case, the 9 full-length articles in the new issue represent an exciting and major addition to anime/manga studies – and to East Asian popular culture studies (as well as related topic) more broadly. It opens with Deborah Shamoon’s translation of a section from the seminal Japanese critical text Ibunka to shite no kodomo (Children as a Different Culture) on children’s perceptions of time, originally published in 1982, and not available in English in full. In her introduction the translator, Dr. Shamoon calls it “a key text in Japanese language scholarship on children and childhood”, and the section serves to both open the issue, and essentially unify the rest of the articles into a cohesive whole. Sandra Annett’s contribution, From Vulnerable Minds to Cosmopolitan Affect: Child Fans of Anime in the 1960s-1980’s, based on a chapter in her Anime Fan Communities: Transcultural Flows and Frictions (Palgrave Macmillan, 2014), examines the specific ways in which early Japanese animation (primarily the Astro Boy television series) was presented to Western audiences in the U.S. and Canada, the changes it underwent from the Japanese original, and the various reasons for those changes. The final essay in the opening “Exploring Childhood” section, Anime in Schools: Going Beyond Globalization and Standards, by Brent Allison (Department of Teacher Education, University of North Georgia) presents a straight-forward research question. In 2018, a college class on Japanese animation is nothing new, but how can Japanese animation be effectively and successfully integrated into the junior high school or high school curriculum. One of the ways Prof. Allison approaches it is through a survey of both secondary school students and “aspiring teachers” enrolled in a “college undergraduate survey course on educational policy, history, and social issues” about their own views towards the potentials that anime presents as an educational tool or aid.

The following section, “Paper Plays and Manga Magazines”, shifts some of the focus towards the objects or paratexts of anime/manga and other forms of popular culture/entertainment. Sharalyn Orbaugh highlights the development of the specific concept of the “child” and “childhood” in modern Japan, and the way in which over the course of the Fifteen Years War (1931-1945, including Japan’s aggression in China, the Lake Khasan and Khalkin Gol conflict with the Soviet Union, and the Second World War), the unique Japanese street entertainment form of kamishibai (“a storytelling performance accompanied by illustrated cards”) was adapted to present particular types of messages to children. Tsugumi Okabe, in Combating Youth Violence: The Emergence of Boy Sleuths in Japan’s Lost Decade, applies her interest in detective fiction in general to manga specifically to argue in an extensive analysis that “…both Hajime [of Kindaichi shōnen no jikenbo] and Konan [Meitantei Konan / Detective Conan] emerged in response to a troubled society, embodying the pure heart in the form of law and order personified.” Ito Go, in Particularities of Boys’ Manga in the Early Twenty-First Century, looks at how shonen manga is continuing to evolve and perhaps even mature – with reference to small but nonetheless meaningful new trends that are now emerging. And, in Training the Next Generation of Mangaka: A Comparison of Award Announcements in Shukan Shonen Janpu and Hana to Yume, Mia Lewis examines not just manga, but rather, manga magazines, and specifically, the process that major manga magazines use for developing new manga creators via open competitions. In particular, the emphasis of this study is on how while announcements naming the winners of these competitions are fairly similar in style and format across different manga magazines, their actual content – such as the tone of the editors’ comments, and even the specific language used, varies quite significantly. This, in turn, can point to how the magazines (and their editors) perceive their intended audiences, and support a discussion about “intended audiences” for different types of manga and the preposition that “shōjo manga seeks to create a girls-only space, while shōnen manga seeks to attract the largest audience possible by appealing to both genders”.

The two essays in the issue’s concluding “Mechanics of Desire” section most clearly demonstrate Mechademia’s new and expanded coverage of “media cultures and texts from across Asia” – their subjects are the Pharrell Williams (anime) music video It Girl and audience reactions to its use of problematic anime imagery, and the way that “otome” games such as Uta no Prince Sama expand the available possibilities within the boundaries of heterosexual romance narratives.

Right now, the Second Arc publication schedule is laid out through the Spring 2024 issue. Future individual issue themes are set to include Materialities Across Asia (Spring 2020), Science Fictions (Fall 2021), Performance (Spring 2023), and Media Platforms and Industries (Spring 2024). Submissions for the Science Fiction issue, and for a Spring 2022 general one are currently being accepted, although no formal CFP has been announced. However, a general style guide is available on the Mechademia website.

For my part, I hope that the hiatus and publication delays did not damage the Mechademia “brand” too much. Anime/manga studies – and Asian popular culture studies more broadly – has come a long way since Mechademia first launched – in no small part because of its influence! I wish everyone involved with Second Arc, whether as an author, editor, reviewer, or in any other capacity, the best – and look forward to new topics, new approaches, new authors – and plenty more new issues!