Japanese animation came to the U.S. in the early 1960’s, with the first television broadcasts of Astro Boy. But it took several dozen years for anime fandom to develop outside Japan, and actual descriptions of how anime/manga fandom around the world developed between the 1960’s and the 1990’s are still few and far between. How did non-Japanese viewers actually perceive Japanese animation during these years? How did fan communities form? At the most basic level, what did anime fans actually do – where were anime clubs formed, when did anime conventions start, how were they organized? What technological or social affordances did fans benefit from? How did anime fans interact with broader fan circles, and engage with broader social structures. How difficult were these interactions or engagements? Answering these kinds of questions is crucial for learning about how anime fandom actually came to take the form that it it has now, as well as for establishing a historical record. 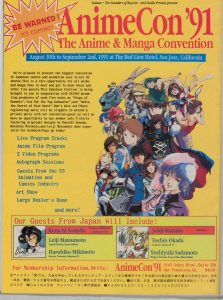 An early, and immediately controversial attempt is Annalee Newitz’s Anime otaku: Japanese animation fans outside Japan (archived version), published in a 1994 issue of Bad Subjects: Political Education for Everyday Life, and since then, cited widely in scholarly writing on fandom and on other, more general topics. Another, much more recent, is From vulnerable lives to cosmpolitan affects: Child fans of anime in the 1960s-1980s (Sandra Annett, Mechademia: Second Arc, 11). But one of the challenges of writing on early anime and manga fans and fandom is that so much of the sources to use in writing about this topic is ephemeral, such as pieces in local, and college newspapers and high school newspapers, and documents that in library science are referred to as “grey literature” – convention programs, enthusiast magazines and fan club newsletters – the kinds of materials that are often hard to locate and access, and generally, not likely to be preserved in library collections.

It is with these challenges in mind, as well as with the inevitable challenge presented by the aging of many of the “creators” of anime fandom outside Japan – in their thirties and forties (if not already older) 30 and 40 years ago, so approaching or past retirement age now, that a group of scholars, including several who themselves have been leaders in the field of anime and manga studies around the world, have issued a call for papers for an essay collection on “archival research in anime and manga fandom before the year 2000”. One of the collection’s co-editor will be Helen McCarthy, whose own writing, such as The anime! movie guide: Movie-by-movie guide to Japanese animation (1997) and Hayao Miyazaki: Master of Japanese Animation: Films, Themes, Artistry (1999), as well as numerous magazine articles, have been instrumental to the formation of the English language anime fan community.

Raiders of the Lost Archives: Anime and Manga Fandom Before the Year 2000

– Any aspect of anime and manga fandom, anywhere in the world…provided the chapter is based on archival materials dated before the year 2000.
– Original research on fanzines and fan clubs, histories of conventions or costuming, fan demographics, means and scope of source material circulation, sales outlets for materials and merchandise, and press reactions to local screenings and fandoms, will be welcome.
– Source materials may be in any language, but where content is germane to the argument a translation of relevant material (eg quotations) into English must be provided.
– The language for all submissions is US English.

The full Call for Papers is available on CFPlist.com.

1 Comment on Call for Papers: “Anime and Manga Fandom Before 2000”