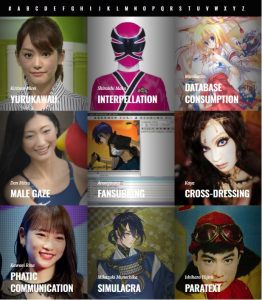 If a student – or even a professor – is interested in a broad and general overview of “Japanese popular culture”, what kinds of basic starting points can they use to begin familiarizing themselves with what the concept actually encompasses? One such starting point is the recent A History of Popular Culture in Japan: From the Seventeenth Century to the Present (E. Taylor Atkins, Bloomsbury Academic), another, though slightly older now, is the Japanese Popular Culture and Globalization volume in the series of short “Key Issues in Asian Studies” handbooks published by the Association for Asian Studies. An excellent one is Introducing Japanese Popular Culture (Alisa Freedman and Toby Slade, Routledge), especially with its design specifically as both a textbook, a “go-to handbook for interested readers”, and a guide to the field’s most important sources and leading scholars.

And now, the University of Tokyo has launched a new resource of this type – the fully online Japanese Media and Popular Culture – An Open-Access Digital Initiative – “a reference work and alphabetical series of essays on important key concepts”. The “key concepts” cover a range of topics both in media, communication, and cultural studies in general, and in Japanese Studies in particular – as specific as “2.5-dimensional” and “fansubbing“, and as general as “cuteness“, “male gaze“, and “participatory culture“. Each “keyword” short essay is then directly connected to a “celebrity or “character” entry. Some of these connections include Mangaesque to Fullmetal Alchemist, Otaku to Okuda Toshio, Yuri to Hanedara Keisuke, and Database to Mimiketto – and, as explained in the site’s How to Use section, “celebrity or character” is actually expanded to mean “star, celebrity, talent, creator, or character from Japanese popular culture”.

Moving from “how”, and to “why”, a goal of the project is establish a “bridge [from] theory to the Japanese cultural context” and facilitate an approach that grounds each theoretical concept in a concrete example, while also providing a short survey of other important writing on it from both non-Japanese and Japanese sources. In this way, for example, the Fansubbing essay overviews both the way that fansubbing itself has evolved, and how scholarly commentary on it has developed over the last couple of decades, before highlighting debates around the fansub release of a particular anime series. Similarly, Paratext introduces the concept as it first was first used to apply primarily to literature, then moves on to “explore the significance of thinking about popular culture and film through the concept of the paratext” – with examples drawn specifically from the paratexts that developed around several major 1950’s Japanese films. Conceptually, these kinds of approaches can allow for a more comprehensive understanding of both Japanese media and Japanese popular culture, and one that would avoid some common pitfalls.

– Japanese Media and Popular Culture: “How to Use”

When evaluating Japanese Media and Popular Culture, probably the first thing to keep in mind is that is it not meant to be a comprehensive survey of either Japanese media or Japanese popular culture. In fact, the site’s “How to Use” section specifically calls for a move in approaching Japanese popular culture “beyond descriptive accounts toward greater engagement with theory”. For that matter, the extent to which it is a good fit for “courses targeting undergraduate students” is a valid question. Exactly how – and why – the specific Keyword topics were selected is a valid and valuable question. Is the scope of the project driven by the research interests of the editors and contributors, or by their own perception of the kinds of topics and theories that undergraduates studying Japanese popular culture are interested in learning about – or should learn about? For that matter, are there any major topics that were not explored but should have been?

Regardless of these questions, Japanese Media and Popular Culture is an important addition to the Japanese popular culture studies field. The list of keywords that it covers can stand for what some of the leading scholars in the field currently think are the most important topics to introduce students to, and similarly, even the list of contributors to the project can be used as a directory of sourts. And, of course, unlike the case with a print volume, a project like this one is by design dynamic and able to evolve. Japanese Media and Popular Culture is an innovative and valuable resource, and I strongly recommend becoming familiar with it to anyone who is interested in the range of subjects and topics that fall under the broad “Japanese popular culture” label!