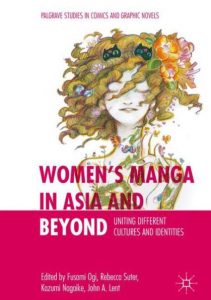 The organizers of the San Diego Comic Convention / Comic-Con International have announced the titles and individuals nominated for the 2020 Will Eisner Comic Industry Awards in various categories, including Best Scholarly/Academic Work. And, for the second time since the category was first introduced in 2012, one of the books nominated in it specifically deals with Japanese comics. The nominated book is Women’s Manga in Asia and Beyond: Uniting Different Cultures and Identities (Palgrave Macmillan).

“Women’s Manga in Asia and Beyond offers a variety of perspectives on women’s manga and the nature, scope, and significance of the relationship between women and comics/manga, both globally as well as locally…The edited volume elucidates social and historical aspects of the Asian wave of manga from ever-broader perspectives of transnationalization and glocalization. With a specific focus on women’s direct roles in manga creation, it illustrates how the globalization of manga has united different cultures and identities, focusing on networks of women creators and readerships.

Taking an Asian regional approach combined with investigations of non-Asian cultures which have felt manga’s impact, the book details manga’s shift to a global medium, developing, uniting, and involving increasing numbers of participants worldwide. Unveiling diverse Asian identities and showing ways to unite them, the contributors to this volume recognize the overlaps and unique trends that emerge as a result.”

Edited by Fusami Ogi (Chigushi Jogakuen University), Rebecca Suter (The University of Sydney), Kazumi Nagaike (Center for International Education and Research, Oita University), and John A. Lent, this volume is based on the work of the Women’s MANGA Research Project, with the individual chapters largely expanding on talks and papers that their authors have presented at conferences organized by the Project since it launched in 2009. The key concept around which it is organized is the idea that manga is “a global medium” – with roots in Japan, but no longer limited to Japan. This means that while it certainly includes several studies of “women’s manga in Japan” (such as Matsumoto Katsuji: Modern Tomboys and Early Shōjo Manga and Hailing the Subject: Visual Progression and Queer Reading in Nananan’s Blue), much of the book’s content specifically pushes the borders of its scope. In this way, the introduction to its first section presents the argument that “the term ‘women’ in the title…does not just refer to biological women but includes other non-masculine subjects, as well.” Later, “manga” is expanded to also include “manga-based cultural products and activities, such as cosplay.”

“the term ‘women’ in the title…does not just refer to biological women but includes other non-masculine subjects, as well.”

Similarly, “women’s manga” or “shojo manga” can encompass topics like the representation of Asia broadly and Australia narrowly in Japanese girls’ comics. And the book’s final section, “Asian Women Comics Artists and Their Careers”, with both critical studies of the work of several artists in Japan, China, and Hong Kong, and personal reflections essentially takes Women’s Manga outside “just” manga studies, and really into comics studies much more broadly defined!

Ed. note: The only review for this book that has been published so far is by Jonathan Clements, in AlltheAnime. In Clements’ assessment, this volume is “a compendium of all the left-overs from the last decade of conferencing”, and “a random collection of essays, less of a book and more like a one-issue journal with a vague pop-culture focus and no style-guide”, although several of the individual essays are quite strong.

Ed. note 2: The previous manga-related book to get a nomination was Boys Love Manga and Beyond: History, Culture, and Community in Japan (2015, University Press of Mississippi – nominated in 2016). Prof. Nagaike was one of that volume’s editors as well.