The start of the new year implies many things, but for websites that deal with news, the start of a new year often implies “year in review” articles summarizing some of the previous year’s major trends and highlighting major events. And, surprising as it may be, when we look back at 2022 in terms of developments related to anime and manga studies, there were several that are worth pointing out specifically! 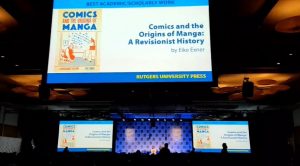 Marking a high point in the development of manga studies as an academic field, 2022 saw the first time that the Eisner Award in this category went to a book on Japanese comics, although volumes on manga have received nominations before. Exner’s study, based on extensive fieldwork he conducted in Japan, working primarily at the National Diet Library, makes the case that American comic strips played a key role in the development of Japanese manga because they were widely translated, available to both readers and authors/artists, and introduced the Japanese market to potential new storytelling and visual techniques. This does not in any way mean that manga “rips off” American comics; nonetheless, some Japanese Twitter commenters have attempted to accuse the author of racism and cultural appropriation. Interviews with Exner are available on this site and on the New Books Network. 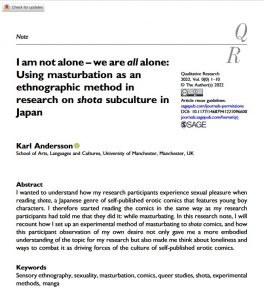 This absolutely unprecedented sequence of events started on April 26, with the OnlineFirst appearance of a research article with the full title “I am not alone – we are all alone: Using masturbation as an ethnographic method in research on shota subculture in Japan”. Nothing of interest happened until early August, when the it began picking up Twitter attention from both other academics and even some politicians, leading, predictably, to media coverage in The Telegraph, Vice.com, and other venues. And an opinion piece in Times Higher Education that presents the original article as an example of “insanity of ethnography’s turn towards introspection and other postmodern research methods that place little value on objectivity” is that paper’s most-read article of the year!

As of August 25, the journal’s publisher’s completed their investigation into the paper, issued a retraction notice, and removed it from the website, with an apology to “readers who were negatively impacted by the publication of this work.”

On Sep. 7, Anime and Manga Studies published a Special Feature on the controversy, including an interview about it with Dr. Casey Brienza, a leading qualitative sociologist with a long record publications on both manga and scholarly publishing. And Dr. Brienza herself has summarized what happened, and what it means, in The Masturbation Article Affair: Japanese manga, scholarly publishing, and the twenty-first century politics of censorship, forthcoming in Publishing Research Quarterly. For what it’s worth, my personal opinion is that the author’s biggest mistake was simply not being sufficiently careful with selecting a journal to publish in. Had the paper appeared in something like Archives of Sexual Behavior or Deviant Behavior (alongside studies of “female-oriented male–male erotica”, including yaoi, and “engagement with female-oriented male–male incest erotica”, among others), it would most likely simply not have attracted any kind of inappropriate or sensational outside attention to begin with. Note: The original version of the paper is available via Wikimedia.org. 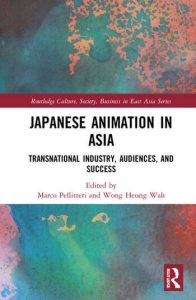 An important addition to the growing list of important books on anime/manga around the world that was published in 2022 is the Routledge essay collection Japanese Animation in Asia: Transnational Industry, Audiences, and Successes, with a particularly interesting chapter on the current state of anime production, and survey chapters on the history and the present of Japanese animation and anime “culture” in South Korea, China, Philippines, Malaysia, Indonesia, and India.

Beyond this, several other major essay collections that were published this year included chapters on anime/manga. It’s particularly important to mention the new Wiley Blackwell A Companion to Japanese Cinema textbook, with chapters entitled “Shapeshifting in anime: Form and meaning” and Shaping the anime industry: Second generation pioneers and the emergence of the studio system”. Anime is also represented in the Oxford Handbook of Children’s Film (Negotiating East and West when representing childhood in Miyazaki’s Spirited Away), and two more specific collections – Japan in the Heisei Era (1989-2019): Multidisciplinary Perspectives (Cinema’s uneasy social critique: The Heisei Era onscreen, with a discussion of the anime film In This Corner of the World, and The Evangelion boom: On the explosion of fan markets and lifestyles in Heisei Japan) and Japanese Visual Media: Politicizing the Screen (chapters on “marginalized groups in Japanese film and anime” – in particular Tokyo Godfathers, and on sponsorship of media production, including anime, by the Japanese Self-Defense Forces. 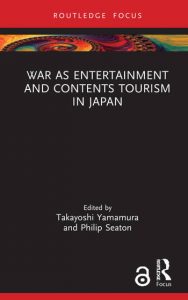 For that matter, the complex topic of “war as entertainment” – with its many reflections in popular culture, Sengoku Basara, Golden Kamuy, Kantai Collection and Attack on Titan among them – is itself the subject of a full essay collection that is available in open access from its publisher. And even beyond these, it’s also interesting to see topics related to anime represented in essay collections on The Arthurian World (Ed Risden, Desire and the flexible Grail: The Japanese Fate franchise and evolving notions of Arthurian power), and on Gender, Creation Myths and their Reception in Western Civilization (Ayelet Peer, Adam the Alien, Eve the Robot: The reinterpretation of Adam, Eve, Prometheus and Pandora in Japanese manga and anime).

Finally, in terms of new journal articles, of course over a hundred new ones makes it a challenge to select any particularly prominent ones. So, these 10 are not necessary a Best Of list – but more of a sample of the range of how the field of anime and manga studies looks like in 2022!

Once again, both in the spring semester, and in the fall, probably dozens of colleges/universities around the U.S. offered full classes on anime and manga. Some of these were general surveys, while others had a more narrow or specialized focus, and while many were offered through Japanese or East Asian Studies departments, others could be found in Film and Media Studies (“Life and Anime” – University of Rochester) Film History (“Introduction to Japanese Anime”, Sarah Lawrence College), and the general Humanities program at the University of Chicago, where Prof. Thomas Lamarre taught Japanese Animation: The Making of a Global Media as a Fall 2022 Humanities Signature Course (“intended to introduce…students to exciting themes, ideas, and materials in the humanities and social sciences”)

And, 2023 already gives us several really interesting titles and projects to look forward to! One that comes to mind right away, from the University of Hawai’i Press, the first-ever full-length study of Japanese adaptations of Alice in Wonderland and the Alice character/image/motif – Alice in Japanese Wonderlands: Translation, Adaptation, Mediation. Beyond that, Prof. Susan Napier, who, 30 years ago pretty much single-handedly kicked off anime studies as a field with Panic Sites: The Japanese Imagination of Disaster from Godzilla to Akira, and has since gone on to author Anime from Akira to Princess Mononoke: Experiencing Contemporary Japanese Animation (updated to Anime from Akira to Spirited Away), From Impressionism to Anime: Japan as Fantasy and Fan Cult in the Mind of the West, and Miyazakiworld: A Life in Art, is also working on what she has described as “The World According to Ghibli: How a Small Japanese Animation Studio Challenged Disney’s American Dream” – an “ongoing book project” comparing the Disney “all-inclusive utopian vision of America” with Ghibli’s “more complex and nuanced vision based on a tolerance for ambiguity, acceptance of loss and a celebration of human interconnectivity with the natural world”.

Similarly, Prof. Michal Cronin (Japanese Studies, College of William & Mary), is currently working on a book that will book-length explore “the pivotal year 1995 as represented in anime, manga, literature, and film”. And Dr. Andrea Horbinski has plans to publish her Ph.D. dissertation on the history of manga from approximately 1905 to 2012 – the working title for this is “Manga’s Global Century”. In terms of essay collections, Palgrave has plans to publish a pair of handbooks on Manga and Anime in Europe and Music and Sound in Japanese Animation, and, now that it is on a solid publication schedule, with eight issues out since the 2015 relaunch, Mechademia: Second Arc is promising readers a Spring 2023 “2.5D Cultures” issue, edited by Prof. Akiko Sugawa-Shimada (Yokohama National University) and then, in the fall, Media Mix, with Mark Steinberg (Concordia University) as the guest editor.

With this, Anime and Manga Studies would like to wish all of you a happy, successful, and fulfilling 2023. Thank you for reading, I hope this site continues to be useful, and if you have any comments, suggestions, or any other feedback, please do not hesitate to reach out. And, if everything works the way I would like it to, sometime in the next few months, I will be ready to make a major announcement that will add A LOT to what animemangastudies.com can offer to the world!