With another academic term now finished, it’s once again a good time to highlight how colleges around the U.S. are actively including anime and manga in their course offerings! At this point, in of itself, a class on anime/manga is no longer anything particularly unusual – since Susan Napier taught what was likely the first such class almost twenty years ago now, there have been dozens of others, at colleges and universities of all types, and all around the country. More are announced frequently – and the ways they are described in marketing and publicity materials are themselves interesting to consider.

For example, several days ago, Washington State University’s WSU Insider news website profiled “Transnational Anime: Japanese Animation History and Theory”, which will be offered through the School of Languages, Cultures, and Race in the spring. The number of students in the class is capped at 30 – and 30 students are currently listed as enrolled. A noteworthy thing about this class is that in order to hire an instructor to teach it, the School successfully applied for a $30,000 grant from the Japan Foundation, Los Angeles.

College classes on comics and graphic novels in general – Western and non-Western – are even more common. But only a few colleges offer not just single classes, but actual formal academic programs in comics studies. Among them is San Francisco State University, which just recently launched an undergraduate comics studies minor. The minor requires a total of 12 credits, and starting in the Spring 2019 term, one of the possible electives that can be used to fulfill the requirement will be Topics in Comics: Manga! 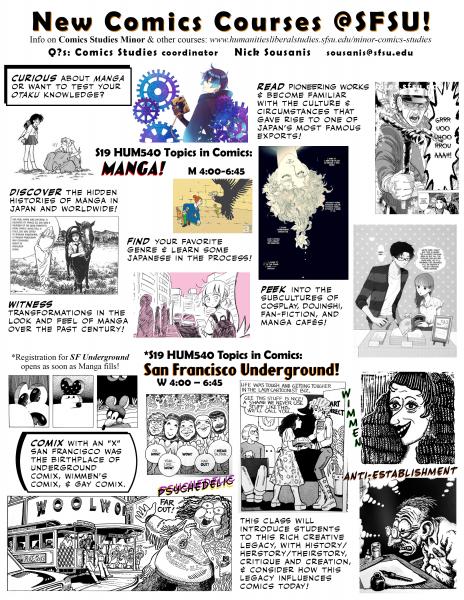 “Curious about manga or want to test your otaku knowledge?  Discover the hidden histories of manga in Japan and worldwide; read pioneering works and become familiar with the culture and circumstances that gave rise to one of the most famous exports of Japan!   We will focus on transformations in the look and feel of manga over the last century, examining relationships with fashion trends and visual arts.  We will also pay attention to the kinds of relationships manga set up with their audiences, and look at the reception history of manga in popular culture (including cosplay, dojinshi, fan-fiction, manga cafés, and more) and scholarship. “

These two are probably not the only classes on anime/manga to launch in the Spring 2019 term. So, if you know of others – and especially if you are taking one yourself – or teaching one – I would very much like to hear from you! And, for that matter, I am currently working on additional materials about these classes, such as more background, and potentially, even interviews with the professors.

The Fall 2017 semester is well under way now – and this means that it’s time for another round-up of classes on anime/manga that colleges/universities around the U.S. are offering this term. As with the prior similar updates, it is meant to be illustrative, not comprehensive – for that matter, I don’t think there is a way to compile a comprehensive list of this kind. Nonetheless, the College Classes on Anime/Manga page in the Resources section of this site is cumulative, and the Fall 2017 classes that I was able to locate have been added to it. In fact, as the total number of classes listed there grows, I hope that it may be possible to start identifying certain trends or patterns in the kinds of colleges/universities that are offering classes on anime/manga, and the ways these classes are described in course catalogs and on department websites.

END_OF_DOCUMENT_TOKEN_TO_BE_REPLACED

A few days ago, RocketNews24 (which proclaims that its goal is to “to bring Asia’s own brand of strange to the English-speaking world) announced that a “U.S. university has ‘Reading and Writing About Magical Girls‘ as introductory English course”. Breaking news. Unique. Unprecedented. Worth the breathless – alternating with bemused – write-up. Oh, yeah, based entirely on a Reddit post and the resulting comments.

Susan Napier taught what I believe was the first course on Japanese animation at a U.S. college/university definitely in the fall semester of 2001 (an archived version of the syllabus for it is available via the Internet Archive) Since then, dozens of schools all around the U.S. have offered similar ones. And, one of the things that I try to do is track as many of them as possible. The College Classes on Anime/Manga page, on this site’s Resource section, is the full list. In the fall of 2015, I highlighted several new classes, including one at Harvard University.

That post definitely calls for an update, though. So, if you were a student at a U.S. college/university last year – or will be one this term, and want to take a class on anime/manga, what kinds of options do you have available for you? END_OF_DOCUMENT_TOKEN_TO_BE_REPLACED

Scholarly writing on anime and manga is, of course, a major component of “anime/manga studies”, but not the only component – and classes that focus on Japanese animation and Japanese comics are an equally important part of the field. But, while the first English-language academic publications on Japanese comics appeared in the late 1970’s, and the first such paper on anime that I am aware of was published in 1993, it wasn’t until the late 1990’s/early 2000’s that colleges began offering such classes, with Susan Napier’s The World of Japanese Animation: Aesthetics, Commerce, Culture, at the University of Texas at Austin being if not the first, then certainly among the first.

Since Prof. Napier (who has since moved to Tufts University) first taught it, these kinds of classes have expanded to a wide range of schools – the Ivy League, other major research universities, both public and private, and smaller regional and liberal arts institutions. Just some recent examples include Anime as Global Popular Culture (Harvard University), Critical Analysis of Anime (Rice University), Anime in Text and Film (Stevenson University), and Explore Japanese Manga and Anime (Union College). Generally, they have taken an introductory approach, and the course description of the one at California State University, Long Beach is typical: “Students examine, analyze, and discuss selected topics in Japanese culture and modern society by analyzing Japanese animation (anime) and printed cartoons (manga)”. But, again, with anime and manga studies as a field now firmly established, clearly, it’s about time for ways of dealing with anime/manga in the post-secondary classroom setting that go beyond the introductory.

END_OF_DOCUMENT_TOKEN_TO_BE_REPLACED

Earlier this year, I compiled and published a list of recent classes on Japanese animation offered by colleges/universities around the U.S. As I mentioned then, I knew that this list would not be comprehensive – there would be classes I simply did not know about, and others that are only being offered for the first time. So, with the Fall 2015 semester now under way – an update. 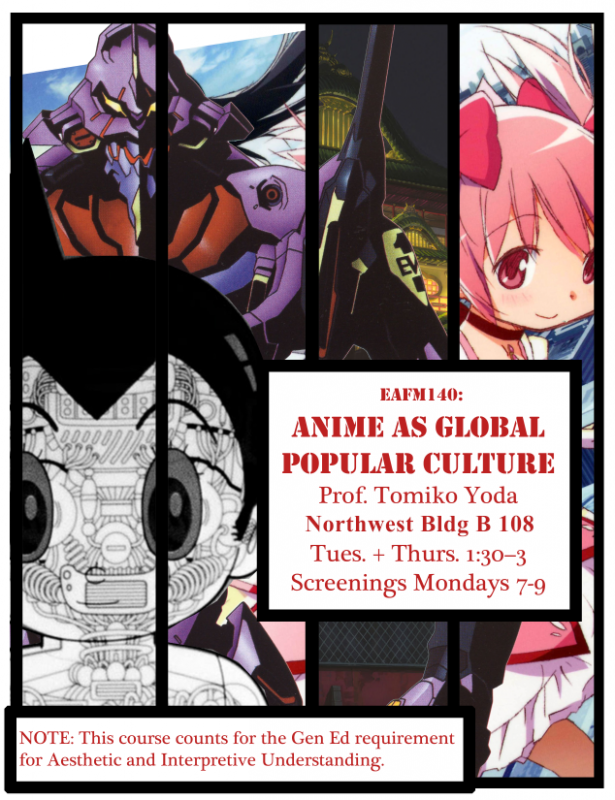 This course examines Japanese animation (or anime) through its generic conventions, formal aesthetic, and narrative motifs. At the same time, the course approaches anime as a lens through which we study contemporary media culture and its local and global production, distribution, and reception. In this sense, anime will be treated as a node in an extensive transnational network involving commercial as well as non-commercial mediums such as graphic novels, live-action films, video games, character merchandises, and fanzines/fan-events.

Harvard’s Department of East Asian Languages and Civilizations is currently highlighting this class as one of its Fall 2015 Featured Courses – along with at least two others that touch on Japanese animation (Global Japanese Cinema, and Media Mix: Representations and Meaning Between Media in Japan)

END_OF_DOCUMENT_TOKEN_TO_BE_REPLACED

College classes on Japanese animation/Japanese comics that are currently being offered at colleges and universities around the U.S. or that have been offered in the past are now listed on a separate page. This page will be updated continuously, and if you know of any other classes that you would like to see listed there, please do not hesitate to let me know!

The introduction to the original version of this list is:

Much of the emphasis of this blog has been on scholarly approaches to Japanese animation and Japanese comics as expressed in “scholarly output” – publications, conference presentations, and the like. But, just as with any other academic field or area, “anime studies” has a second side – teaching about Japanese animation. And in fact, the question “are there classes at American colleges/universities on anime” is one that gets asked fairly frequently.