This is precisely why Interpreting Anime (University of Minnesota Press, 2018), is a such a welcome addition to the body of English-language scholarly writing on Japanese animation. The author, Christopher Bolton, is a professor of comparative and Japanese literature at Williams College, with a focus on Japanese science fiction in particular, and has been studying Japanese animation since the early 2000’s. So, what exactly does Interpreting Anime add to the growing list of “books on anime”, and, turning this question around, how it is actually useful, and to whom? END_OF_DOCUMENT_TOKEN_TO_BE_REPLACED

In a previous post, I highlighted several books that I think are the best to recommend for someone who really knows almost nothing about Japanese animation/Japanese comics, and wants an introduction that is both accessible and reasonably comprehensive. The titles that I profiled – among them Anime: A Critical Introduction, Dreamland Japan: Writings on Modern Manga, and Manga: Introduction, Challenges, and Best Practices – all strive to be just. But, what kinds of books could I recommend to a reader who is interested not in anime/manga “broadly defined”, but in the work of a particular anime director or manga artist/writer?

For many people, Hayao Miyazaki is anime/Japanese animation – and this is not unreasonable. Sales figures, critical recognition, awards – and scholarship – all contribute to this, to the point where, as Jaqueline Bernd notes (in her essay “Considering manga discourse: Location, ambiguity, historicity”, in Japanese Visual Culture: Explorations in the Worlds of Manga and Anime): “Non-Japanese scholars tend to assume that his movies are typical as a whole because of their mere presence in Japan; they frequently treat these animated movies are mirrors of Japanese culture, assuming the existence of a homogenous audience, and often implicitly comparing them to Disney products, but they rarely locate them within the history and present variety of animation in Japan.” But, again, just as Miyazaki and his films often serve as points of entry into the “worlds of manga anime”, writing on Miyazaki and his films can serve as point of entry to anime scholarship. 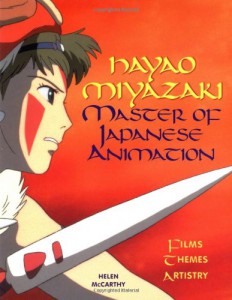 First published in 1999, Hayao Miyazaki: Masster of Japanese Animation – Films, Themes, Artistry is likely the first one on Miyazaki that a reader will come across. It is widely available and easy to read, with a straight-forward organizational scheme that consists of an overview of Miyazaki’s “life and work”, chapters on seven of his movies, from Castle of Cagliostro to Princess Mononoke, each divided into identical sections (“Origins”, “Art and technique”, “The characters”, “The story”, “Commentary”), and a concluding one on “The Miyazaki Machine”. Of course, one thing to keep in mind is that it is almost twenty years old now, and so, simply does not cover either the Oscar-winning Spirited Away, Miyazaki’s other subsequent projects, or his role as the conscience – or vocal critic – of the animation industry in Japan. END_OF_DOCUMENT_TOKEN_TO_BE_REPLACED

As I mentioned a couple of days ago, I am currently trying out a new way to manage the work-flow that would go into developing a comprehensive listing of English-language academic publications of anime and manga – i.e., the Bibliography of Anime and Manga Studies. Whereas previously, i would work to put together comprehensive lists of all types of publications (books, chapters in edited collections, entries in academic encyclopedia, journal articles, studies/working papers/other grey literature), and only present it once the list was complete, now, I am breaking the final list into major components, and presenting them separately. I presented the directory to/list of articles on Japanese animation (anime) and comics (manga) published in English-language academic journals in 2008 already. Right now, I am also pleased to present a similar list of monographs, edited essay collections, and individual chapters (as well as articles published in “scholarly encyclopedias”, and as grey literature.)

Since launching this project over a year ago, a significant portion of my work has gone towards presenting materials – such as lists of recent academic publications on anime/manga, that until now, have not been available anywhere publicly. With the lists now complete going back to 2010 – I can begin moving into the project’s next stage. This will involve going back into my own archives and the legacy Online Bibliography of Anime and Manga Research to extract and present lists of English-language scholarship on anime/manga published prior to 2010 – all the to 1977 – the year that the first such paper that I’m aware of was published. And, right now, I am pleased to be able to present the 2009 edition of the Annual Bibliography of Anime and Manga Studies.

As with all other editions of the Bibliography, it is also available as a separate page. Any further updates will be reflected on that page only, not in this post.

In terms of new publications on anime/manga, 2009 definitely stood out for the relatively large number of books that were published over the course of the year. These included two separate monographs on the life and works of “God of manga” Osamu Tezuka, Thomas Lamarre’s intensely theoretical The Anime Machine: A Media Theory of Animation, with its strong call to shift the focus in anime studies away from an emphasis on either textual or anthropological/sociological readings, and towards an analysis that builds on the unique qualities of animation as an art form and a way of representation, two separate personal testimonials by anime industry professionals, and even a pair of titles on anime/manga in the Rough Guides series of popular reference handbooks. In addition, the year saw over 20 individual chapters on anime in various essay collections, and some 70 individual peer-reviewed articles, once again in a wide range of journals in fields including animation studies, comics studies, Asian/East Asian/Japanese studies, film studies, education, literature, media studies, and other areas of the humanities and social sciences. END_OF_DOCUMENT_TOKEN_TO_BE_REPLACED

To the best of my knowledge, 2010 was simply THE high point to date of English-language scholarly interest in anime and manga, with 10 new monographs, 6 essay collections (with a total of well over a hundred chapters), 29 more chapters in other essay collections, and over 60 individual articles in scholarly-peer reviewed journals.

As always, it is possible that this list is not absolutely complete – you are welcome to suggest additional titles to add.

And, as always, this list is also available as a separate page. Any new updates will be reflected on that page only.

END_OF_DOCUMENT_TOKEN_TO_BE_REPLACED 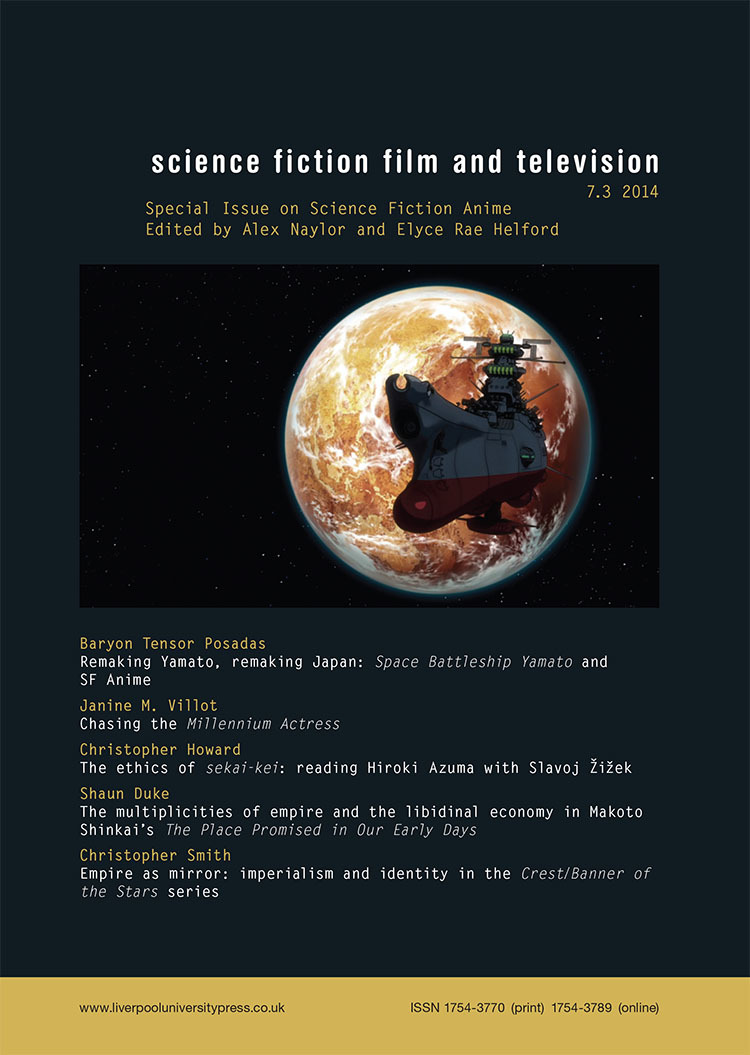 With this in mind, ever since Liverpool University Press launched the journal Science Fiction Film and Television, the only peer-reviewed scholarly journal I am aware of with that specific focus, I have been looking forward to the kind of scholarship on Japanese animation the journal would feature. Until now, it was limited to reviews of books (and edited collections containing chapters on) anime, as well as one review of a particular anime film. And now, “science fiction anime” is the specific theme of the journals’ new Autumn 2014 issue. END_OF_DOCUMENT_TOKEN_TO_BE_REPLACED 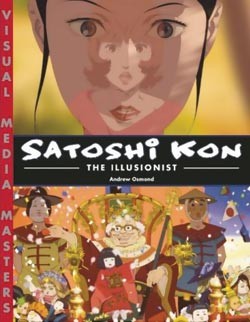 Kon’s career, first in manga and then in anime, spanned a period of 26 years – from his 1984 debut with the award-winning short comic Toriko, to his death from pancreatic cancer in 2010. But over the course of this career, he directed only four feature films and one anime television series. But, as I demonstrate, these five works have received significant attention in the literature of anime studies. END_OF_DOCUMENT_TOKEN_TO_BE_REPLACED